Eric Di Lauro Trains one of his Proteges Evan Godbee

07 April 2011 Evan Godbee
While working with the trainers at Gold’s Venice, I have generally been in the position to choose which body part the trainer helps me with.  The trainers have also been taking the role of an instructor, showing and telling me what to do.  Training arms with pro trainer Eric Di Lauro and IFBB pro  Hidetada Yamagishi was a whole different ball game. 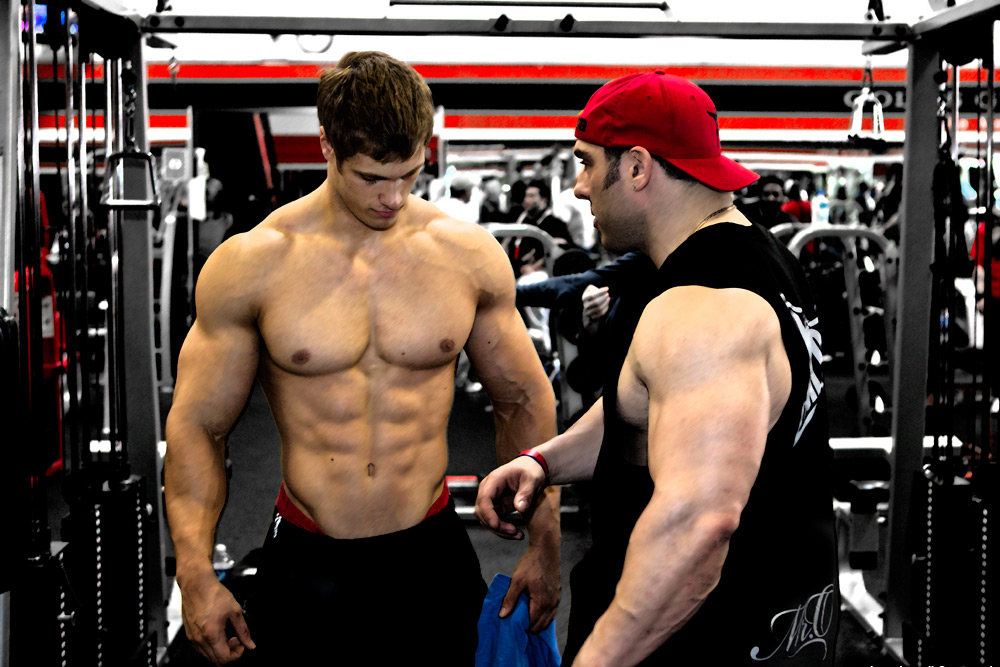 This time I still had some instruction from Eric but I was training with them rather than being trained by them.  It was me who had to keep up with these legendary guys.  Fortunately we were training our arms which is one of my strongest body parts.

Hidetada and Eric were both nice guys and encouraged me in terms of my physique.  Hide thought I had big arms, which I think is a big compliment coming from a top IFBB pro.  Still they were nothing compared to Hidetada’s and Eric’s massive guns.  Eric told me if I brought my upper chest up it would match my delts and arms.  He thought my back was good but I could use a little more width and thickness.  Eric also thought my hamstrings needed a bit more fullness to produce that rounded shape.  It instills confidence in me that all the trainers tend to have the same ideas as each other and myself in terms of what I need to work on.  Hide was also kind enough to take a photo with me after we finished training and both Eric and Hidetada signed a Gold’s Gym tank top for me.  Unfortunately Hidetada is signed by another sponsor, so I won’t be making him the focus of this article.  But I thought the readers would be interested in my impression of him and to be aware that he was training with us every step of the way.

Anyway to get back to the training I actually had been under the impression that we were training shoulders.  So I brought my lifting belt and straps which weren’t really necessary for the workout.  I think they were a bit confused why I was carrying straps around while we were training arms.

The first exercise we did was a seated W curl machine.  By that I mean the arms are positioned on pads at the sides and are angled out a little.  From there the handles below are grasped and curled up so there is kind of a W shape against the body.  Eric instructed me to squeeze the biceps firmly at the top and keep the tension on during the eccentric phase of the movement.  We completed a warm up set before we did three working sets of 15 – 20 repetitions.
Machine W Curl – 4 sets of 15 – 20 reps
Throughout the workout we would complete a bicep exercise then a tricep exercise before returning to a new bicep exercise.  This gave each muscle group a short rest before we hit it again which was good because we were training quite hard.  It also kept both muscles pumped full of blood.

Our first exercise for triceps was a cable press down.  Eric had me lean slightly forward for this one and squeeze the triceps down.  I had to be careful not to allow my arms to come up further than a ninety degree angle because as Eric explained it takes the tension off the triceps.  He also mentioned that this exercise could be done with the elbows in as I did it or with the elbows flared out as he performed it and each would hit the triceps a little differently.  This exercise was super setted with rope pull downs in which the key point was to spread the rope as wide as possible at the bottom to engage the outer head of the triceps. 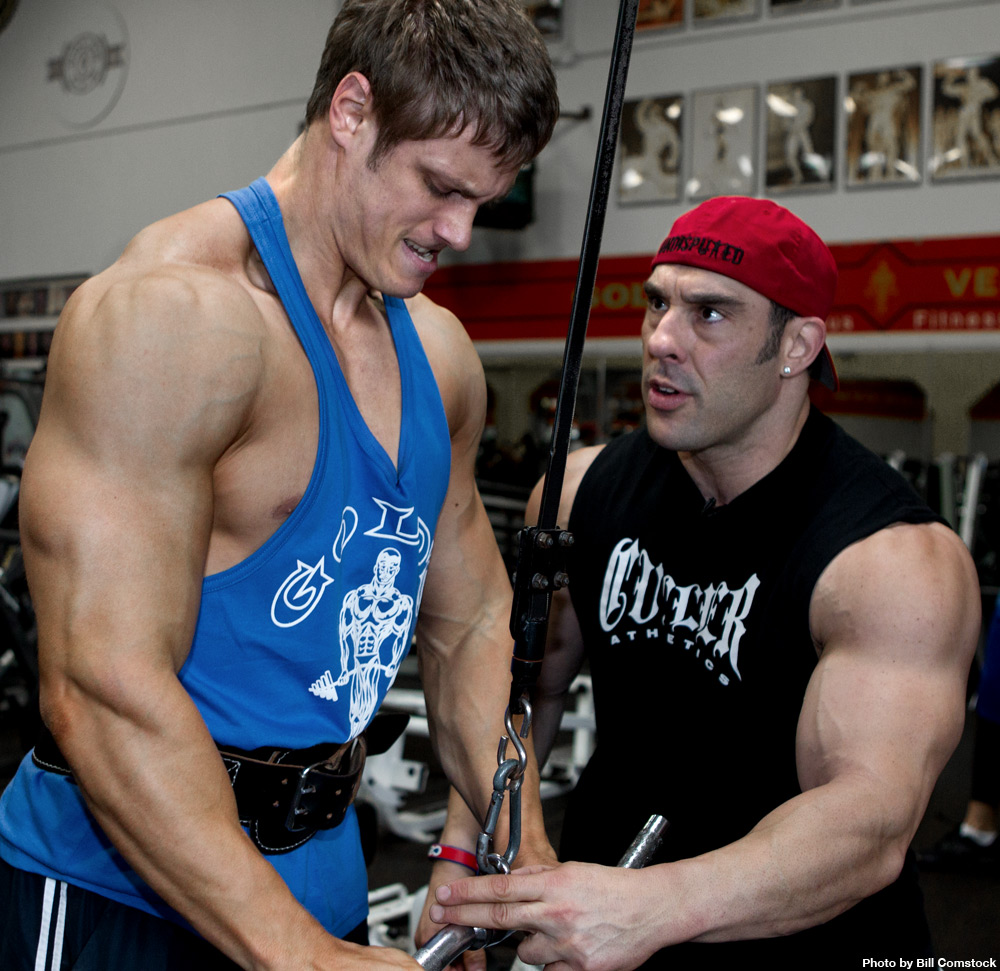 Cable Press Down – 4 sets of 10 – 15 reps
Super set with:
Rope Pull Downs – 4 sets of 10 – 15 reps
We walked back in to the first room of the gym and Eric set up an incline bench to an angle just below forty five degrees.  I figured we were doing incline curls but when Eric laid on the bench facing downward I knew we were doing spider curls with dumb bells.  For those who don’t know what this is, you lay face down on an incline bench (or you can you use the back of a preacher curl machine).  With your arms hanging you curl the weight up and squeeze for a second at the top before lowering slowly to the starting position.  In fact Eric took things a step further and got me to keep my elbows a little forward.  This way it reduces the tendency to swing and encourages a stationary elbow position.  Another tip Eric suggested is a person can spot the last few reps of each set to assist the person performing the spider curl to get a great peak contraction at the top.  This exercise works on the bicep peak, which is just where I was feeling it.  We did four sets of 12 – 15 reps and with Eric and Hide there encouraging me to get those last few reps it was all the motivation I needed. 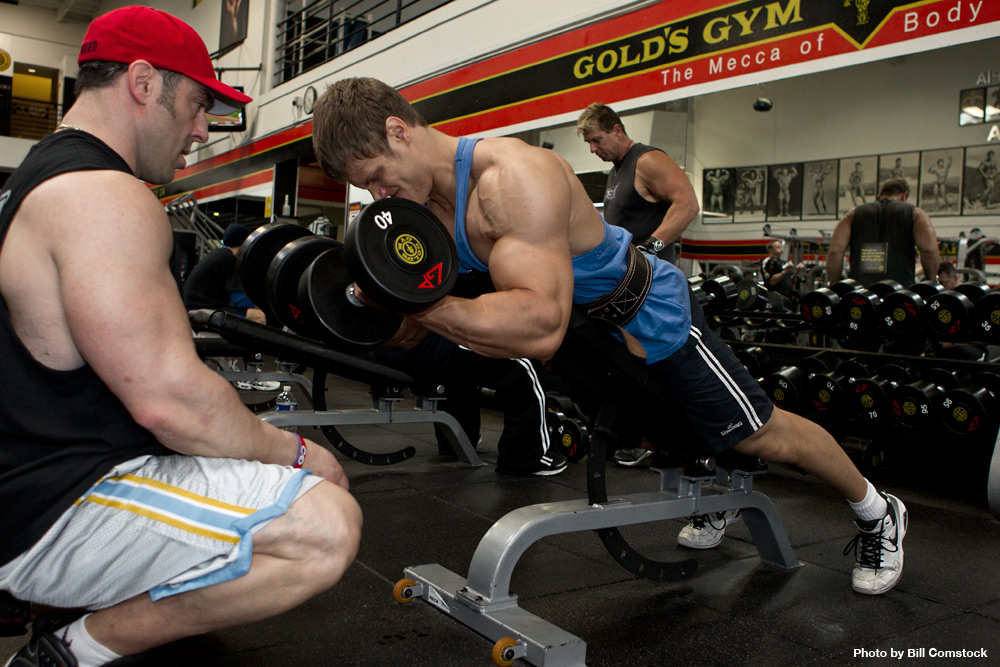 Dumb bell Spider Curl – 4 sets of 12 – 15 reps
At this point Eric changed the angle of the bench to flat and we started loading a cambered bar with plates for, you guessed it, lying tricep extensions.  These were done with the upper arms angled a little behind the head.  The extension movement at the elbow also emphasized a backward movement more than an upward movement.  Care was taken not to lower too far in order to keep tension on the triceps.  At the end of each set we would rep out with close grip bench presses.  The close grip presses were done from the top of the chest with the elbows flared right out to the sides.

Moving on we took the cambered bar over to the standing preacher curl.  However instead of doing regular curls we did them facing the opposite direction kind of like a standing spider curl.  With triceps placed against the pad I curled the bar up, being careful not to come too high, which would take the pressure off the biceps.  I then lowered In a controlled fashion and repeated the movement.  For this exercise it is important to have a spotter hand the bar to you and take the bar from you at the end of the exercise.  Of course they can also help you as Eric did by assisting with a few forced reps.  We really tried to push each other on this exercise, straining out those extra few reps at the end of each set.
Standing Reverse Preacher Curls – 4 sets of 12 – 15 reps
For our next tricep exercise we moved into the far room of Gold’s to use the Hammer seated dip machine.  Eric explained that this machine really helped to build thickness into the back of the tricep.  It was important to focus on a full range of movement with a squeeze at the bottom of the extension motion.  Because of the heavy loads required, often above body weight, it helps to have a spotter hold you down by pushing down on your traps.  After four sets it was time for our next bicep exercise.
Seated Hammer Dip – 4 sets of 10 – 15 reps

The bicep exercise Eric chose was seated dumb bell curls.  The reason we were doing them seated assumedly was to make the exercise stricter by minimizing swinging.  I started off by curling up to my shoulder.  To make the exercise isolate the biceps more and reduce involvement of the front delts Eric told me to keep the elbows stationary and curl from this position.  This reduced the total range of motion a little but as intended made the contraction more isolated to the biceps.  We were already quite fatigued at this stage so the weights we were using were moderate.  I should also point out that we started each curl from a palms in position and supinated our forearms during the curl.  We curled one arm at a time in an alternate fashion so we could focus our contraction in just one bicep at a time. 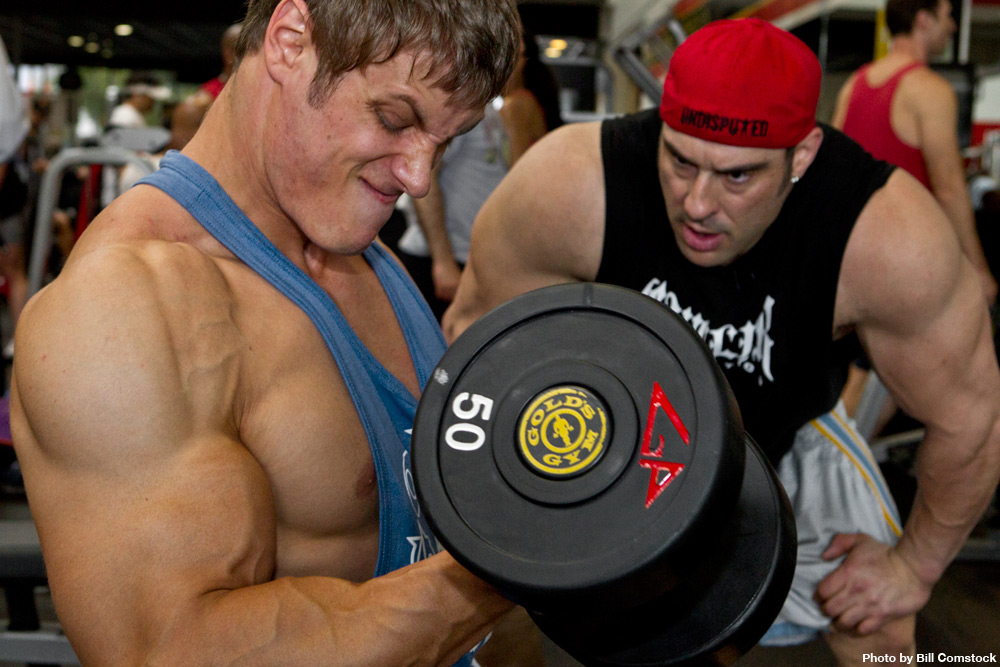 To finish off the biceps and triceps we did a superset.  The first exercise was a one arm cable extension.  The key technique used here was to turn the handle on the way down so that the palm faced towards the outer thigh at the bottom of the movement and the arm was a little out from the body.  I believe this focused on the outer head of the triceps. Again the point was made not to bring the elbow up past ninety degrees in order to keep the tension on the triceps.  For the bicep exercise we did rope hammer curls from a low pulley.  This was similar to a regular hammer curl with dumb bells with a rope substituted in.  Eric noted that I need to be careful on all my bicep movements because I tend to raise my elbows and involve the shoulders a bit.  On the other hand he said I do have great bicep development so I must be doing something right.  Alternating between these two exercises was a great way to finish off both the biceps and triceps. 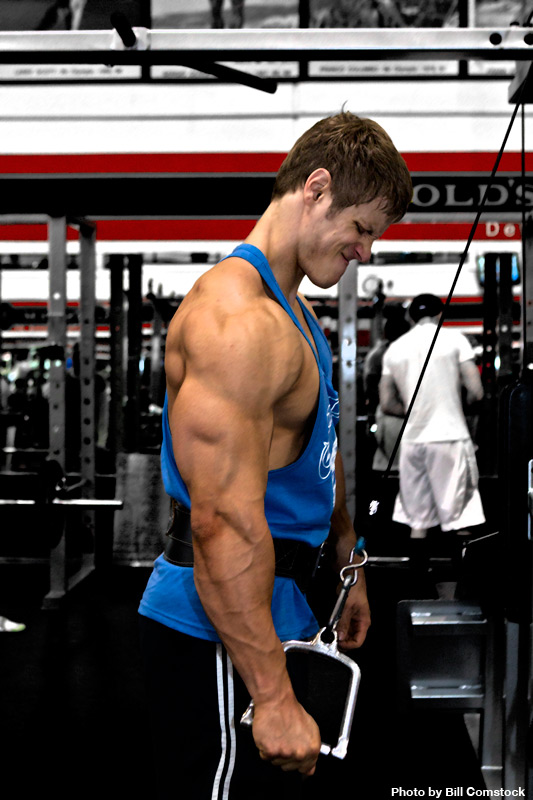 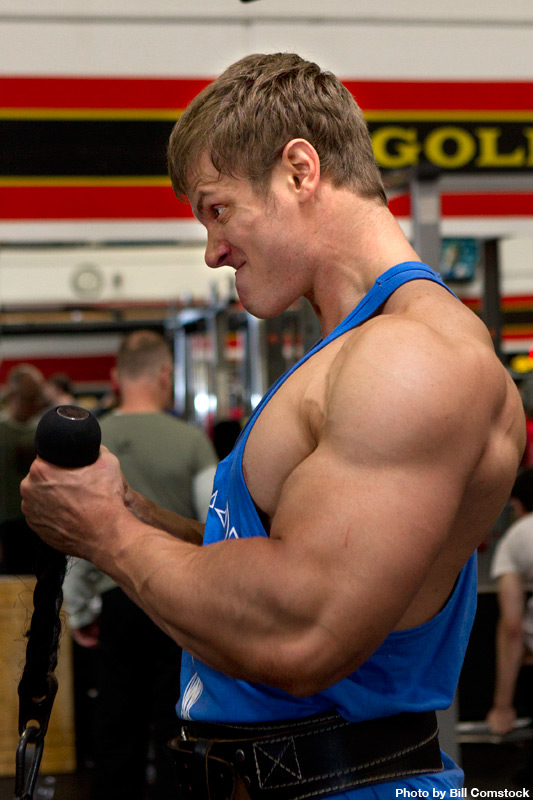 Lastly we did some forearm curls. I usually never do direct forearm work beyond hammer curls because I already have heavily developed forearms…but when in Rome.  I did one set of standing forearm flexor curls behind the back then three sets of forearm flexor curls with a straight bar over the end of a flat bench.  I just tried to get a full range of motion and contraction for as many reps as possible. Hidetada Yamagishi spotted me for these.  I’d liken forearm training to calf training because both burn similarly.  I also got a really tight pump in my forearm flexors during and after the exercise.

It was a great experience training with Eric and Hidetada.  It is one that I won’t soon forget.  Thanks guys!

I rounded out the day with a brief abs and lower back workout.

Abs and Lower Back