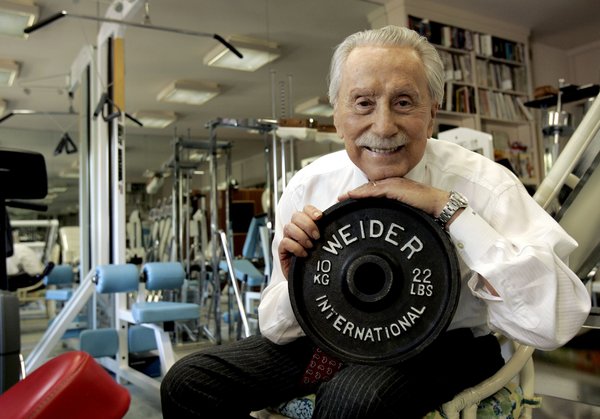 Robert Galbraith/Reuters
Joe Weider at his home in Los Angeles in 2006.
LOS ANGELES (AP) — Joe Weider, a legendary figure in bodybuilding who helped popularize the sport worldwide and played a key role in introducing a charismatic young weightlifter namedArnold Schwarzenegger to the world, died Saturday. He was 93.

Follow@NYTNational for breaking news and headlines.
Twitter List: Reporters and Editors
Weider's publicist, Charlotte Parker, told The Associated Press that the bodybuilder, publisher and promoter died of heart failure at his home in Los Angeles' San Fernando Valley.
"I knew about Joe Weider long before I met him," Schwarzenegger, who tweeted the news of his old friend's death, said in a lengthy statement posted on his website. "He was the godfather of fitness who told all of us to be somebody with a body. He taught us that through hard work and training we could all be champions."
A bodybuilder with an impressive physique himself, Weider became better known in later years as a behind-the-scenes guru to the sport.
He popularized bodybuilding and spread the message of health and fitness worldwide with such publications as Muscle & Fitness, Flex and Shape. Schwarzenegger himself is the executive editor of Muscle & Fitness and Flex.
He created one of bodybuilding's pre-eminent events, the Mr. Olympia competition, in 1965, adding to it the Ms. Olympia contest in 1980, the Fitness Olympia in 1995 and the Figure Olympia in 2003.
He also relentlessly promoted Schwarzenegger, who won the Mr. Olympia title a then-record seven times, including in 1980 and every year from 1970 through 1975.
"Every sport needs a hero, and I knew that Arnold was the right man," he said.
Weider brought Schwarzenegger to the United States early in his career, where he helped train the future governor of California as well as aided him in getting into business. Schwarzenegger also said Weider helped land him his first movie role, in the forgettable film "Hercules in New York," by passing off the Austrian-born weightlifter to the producers as a German Shakespearean actor.
"Joe didn't just inspire my earliest dreams; he made them come true the day he invited me to move to America to pursue my bodybuilding career," the actor said in his statement. "I will never forget his generosity. One of Joe's greatest qualities is that he wasn't just generous with his money; he freely gave of his time and expertise and became a father figure for me."
Weider also mentored numerous other bodybuilders.
Born in Canada in 1919, Weider recalled growing up in a tough section of Montreal.
Just like the apocryphal tale of the skinny kid who starts working out after a bully kicks sand in his face, Weider said he was indeed a small, skinny teenager picked on by bullies when he came across the magazine Strength.
He had tried to join a local wrestling team, he said, but was turned down by the coach who feared he was so small he'd be hurt.
Inspired by the magazine, he built his own weights from scrap parts found in a railroad yard and pumped them relentlessly.
Word of his efforts got around and he was invited to join a weightlifting club.
"When I saw the gym, saw the guys working out, supporting one another, I was mesmerized," he recalled.
He won his first bodybuilding ranking at age 17, and soon after began to publish his first magazine, Your Physique.
Later he started a mail-order barbell business, and in 1946 he and his younger brother staged the first Mr. Canada contest in at Montreal's Monument National Theater. At the same time, they formed the International Federation of Bodybuilders.
In recent years, Weider donated much of his bodybuilding memorabilia to the University of Texas at Austin, which opened the Joe and Betty Weider Museum of Physical Culture in 2011.
He is survived by his wife.
Posted by MR CANADA PHYSIQUE ADVISOR at 6:49 PM
Email ThisBlogThis!Share to TwitterShare to FacebookShare to Pinterest