Tom Merchant
Sentinel Tribune
MARSHALL — Former Westbrook Walnut Grove grad Jennifer Olsem Louwagie has turned her love for physical fitness into a budding pro body building career.
Louwagie, a farm girl from Westbrook, was raised helping her father Gene lifting hay bales which helped her build muscle in her arms. In high school she was a middle and long distance runner in track. She said, “my coach Joan Bultman (Zieske) encouraged me to work hard and not complain about the hard work it takes to be successful!”
Her first introduction to weight lifting came after track work outs, she finished lifting weights. She continued with her training while she attended Southwest Minnesota State College where she studied Physical and Health Education for teaching. After graduation she got her certificate as a Personal Trainer and worked for Marshall Avera Hospital Wellness Center. She said, “I was teaching aerobics and training and I loved my job.” She then took a job teaching physical education at the K-8 school in Marshall for eight years.
In 2000 Olsem married her husband, Bill Louwagie, the couple have three children. After eight years of teaching she and her husband decided it was important for her to stay home with their children.
That is when she became more interested in bodybuilding and a super healthy lifestyle. She also was planning a ten year anniversary trip to the 2010 Olympia in Las Vegas. After that trip she was motivated to finally take the leap and do a figure show. In June of 2011 she did well self training and placed 3rd in the open class and 2nd in the Masters class. She said, “I knew I could do better.”
While attending the 2011 Olympia she and her husband met her now trainer Eric DiLauro. DiLauro has trained the great four time Mr. Olympia Jay Cutler and many other celebrity, amateur, and pro competitors.
In October of 2011 Louwagie with some help from Dilauro, she placed 1st in her class, 1st in Master’s Figure, and overall master’s at her second show.
Jennifer and her husband decided to contact DiLauro to train to bring out her best! After working out with DiLauro for a while they decided that she should look into competing in a new category called Physique. This division is a cross between women’s body building, but with less muscle and figure with more lean muscle.
In March of 2011 she competed in her first Physique event on the amateur stage at the NPC Gopher State Classic in Eden Prairie. She won 1st in masters, and 1st overall Physique. In May she competed in the Jr. USA’s placing second, but only first place was awarded a pro card. Then in the Team Universe in New Jersey she placed second, and the top three were given their pro cards. She said, Yes — My goal was to earn my pro card! My trainer told my husband that he would have me Pro in three shows — we did it!”
When asked why she trains, she said, “ I love beautiful muscles! I enjoy looking and feeling strong! Weight training is fun! When I train it is like I go play at the gym!”
She lists her goals as: To place top 3 in a Pro Physique show in 2013. Get invited to compete in the Arnold. Compete at the Olympia. Get sponsored by a supplement company. Be a healthy role model for my kids — getting them to eat healthy. Continue to motivate an inspire, and leave an impact in the fitness world.


FOR ANY ENDORSEMENTS OR TRAINING SERVICES FROM ERIC DILAURO PLEASE CONTACT ERIC @ : MRCANADAPRO@GMAIL.COM

JEN LOUWAGIE IS NOW IN CONTEST PREP FOR THE NEW YORK PRO IN MAY 2013.
OUR PREP IS GOING WELL WITH AN AWESOME OFF SEASON TRAINING WHICH INCLUDED LOTS OF REST AND MUSCLE GROWTH .
IT WILL BE A GREAT YEAR WITH THE ADDED SIZE I AM SURE YOU WILL SEE HER ON THE STAGE OF THE MR OLYMPIA 2013 THE DEBUT OF WOMENS PHYSIQUE! 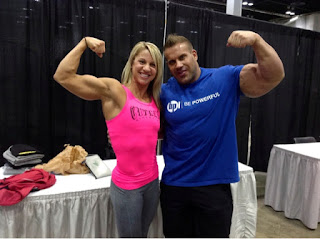 Posted by MR CANADA PHYSIQUE ADVISOR at 10:13 AM
Email ThisBlogThis!Share to TwitterShare to FacebookShare to Pinterest