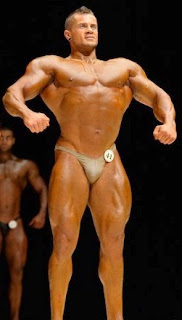 Jon Derynck of Grande Pointe was third in the men's junior division at the Canadian Bodybuilding Federation championships. (Contributed Photo)
By Mark Malone, Chatham Daily News
Saturday, July 13, 2013 1:58:43 EDT AM
The nickname Bubba conjures up images of a good ol' boy drinking beer and eating barbecue.
That's not Jonathan (Bubba) Derynck.
The Grande Pointe native has sculpted his physique for five years and been a competitive bodybuilder for almost three.
He placed third in the men's junior division at the Canadian Bodybuilding Federation national championships in Halifax last Saturday.
“Third place was a good eye-opener,” said Derynck, who turns 21 on July 25. “It let me know my hard work paid off, but my hard work isn't over yet.”
He's already back in the gym preparing for the 2014 national championships.
Staying in top shape means monitoring his meals and workouts year-round, but it's especially strenuous in the 12 weeks before a competition. That's when he sacrifices even more than usual: a stricter diet, more weightlifting, less time with friends, more sleep.
Derynck weighed 233 pounds on stage. He's up to 250 now and will peak at roughly 270 before buckling down for his next competition.
The Fanshawe College fitness and health promotion graduate works in London as a personal trainer at GoodLife Fitness.
He turned to bodybuilding after tiring of hockey. He played 26 games in parts of four junior 'C' seasons with the Dresden Kings and Wallaceburg Lakers.
“I was playing hockey and then I started watching my focus shift from hockey to the gym,” he said.
Derynck still plays pickup hockey, but he doesn't miss his junior 'C' days.
He qualified for the national championships with a second-place finish at the provincials last year.
“It was pretty overwhelming,” he said about the nationals. “It was like, you're in the middle of it and then it's done. It's not until later you realize, 'I'm third in Canada.'”
Derynck likes his chances of winning gold next year. He learned a lot this year, plus some of his competition will be too old to return.
“Third place lets me know my hard work paid off, but it's a kick in the butt to go get (first place),” he said. “Next year is my last year as a junior and that's what I plan on doing.”

Posted by MR CANADA PHYSIQUE ADVISOR at 4:08 PM
Email ThisBlogThis!Share to TwitterShare to FacebookShare to Pinterest